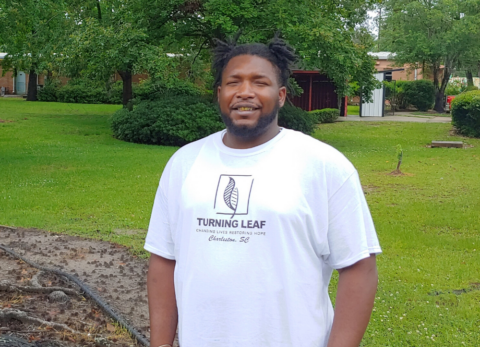 If you live in Charleston and go downtown on a weekend, chances are you’ve been approached by a little boy trying to sell you his handmade palmetto roses. Chances are he’s black, and chances are you’ve said no, and gone on with your walk or your fancy dinner.

Each of those little boys has a story, though. They come from a home that’s possibly not a happy one. They have a future that doesn’t always feel bright.

Jermaine was once one of those little boys. This is the story of how he went from peddling flowers to drugs, and then came to Turning Leaf to turn his life around.

Jermaine grew up in a house with his mama, his stepdaddy, three brothers and a sister. They lived in West Ashley for a while, then moved to downtown Charleston when he was still quite young. “It was always a struggle,” he says. “My stepdaddy was the only one working. Mama couldn’t find anyone to watch all five of us kids, so she mostly stayed home and watched us.”

Jermaine was, as he puts it, “hard-headed.” He didn’t always do what he was supposed to and got used to beatings from both his parents. “I’m being treated like the black sheep of the family,” he says.

With his biological father out of the picture and a not-great relationship with his parents at home, Jermaine grew close with his auntie and uncle. They’d pick him up, have him spend the day with them, and he loved it…until his mama told them to stop. She had five kids; either they had to take all of them, or they couldn’t have Jermaine.

Finances were always tight, so Jermaine learned early to make his own way. He was barely ten years old when he started gambling on the streets. “I learned to shoot dice or play cards with the older boys,” he says. He also learned to make palmetto roses, the kind sold all over the Charleston peninsula.

It was good to have his own cash, but there were drawbacks. He brought home so much money, in fact, no one believed he was just gambling and selling roses. “They didn’t think I was really just gambling,” he says. “They thought I was already, at eight or nine years old, slinging packages [selling drugs]. But I was really good at gambling, and I was making a lot of palmetto roses.”

His mama grew so convinced Jermaine was dealing drugs that she had his aunt and uncle intervene. They sat him down, told him about the dangers of dealing drugs, and didn’t believe he was only gambling. So, now that he was a little bit older, he thought, “Okay, you already think I’m selling drugs. I might as well go ahead and start doing it now.” So he did.

He was already 16 or 17 when he started dealing. At first, he didn’t do any of the drugs he dealt – his first time with weed ended with a scary, panicky feeling – but that changed later on. He stayed in school for a while, but since he was always that kid who was in trouble for clowning around, skipping class, and “messing with the females,” it was soon easier to stop going entirely. Jermaine dropped out of school in the 10th grade.

His mama knew what Jermaine was up to, but she couldn’t stop him. He stayed with his aunt instead of going home, or with the older girls he liked to hang out with. His mama would call and ask him to come home, but he’d tell her, “I’ll come see you, Mama, but I’m not dealing with all five of us in that house again.” His crowded, chaotic childhood wasn’t an experience Jermaine was willing to relive.

Jermaine’s first serious charge came in 2015. “I was coming from the club and I stopped by a store,” he says, “I was teasing the ladies inside, I just wanted to get a little cigarette, make conversation, just be in the mix, ya know?” Police showed up and he tried to leave in a hurry, all his friends yelling “get in the car and go! Get in the car and go!” knowing he had drugs on him. The details are fuzzy, but once he was in the car, he saw a police officer approach the vehicle. In a panic, he put the car in reverse and cut the wheel sharply hoping to be able to cut out of the parking lot before the officer got to him. In his hurry to leave, he cut the car too sharply, and end up hitting the officer that was approaching the car. “It wasn’t bad, he had a little scratch on this thumb and a little bruise on his knee. I was just trying to not get caught up and go to jail, but I still got caught up, and ended up going to jail.” He was charged with possession as well as assault and battery on an officer, and it was the first time he realized he was in some real trouble. “When those cuffs closed on my hand, I knew it was all over for me.” His daughter was about 15 months old at the time, and suddenly he was looking at going to prison for a long time. After this he was caught drug trafficking, and then further with possession with intent to distribute. He was selling crack cocaine and ecstasy mostly. During his time in prison, he learned quickly that he never wanted his daughter to see him like that again “that used to stress me out” he was used to being the big guy in lockup, the big man. But in order to keep that reputation you can’t be depressed, he says “I used to just try and sleep that off, sleep off that emotion, and depression”.

Jermaine got lucky, though. His case got dropped on a procedural error, and he never did much time for it; instead, he was out on bond, then on extended probation. He learned about Turning Leaf in 2018, but with the charges still not closed out, he couldn’t join until late 2019. Now, he’s almost ready to graduate.

Today, Jermaine is focused on staying focused, and using the skills he’s learned at Turning Leaf to stay on the straight and narrow path. Stop and think is the most useful skill in keeping himself from making bad decisions and winding up back in jail. “I came too far,” he says. “I can’t worry about going back to jail. I’m not breaking the law no more.” His goals are to get a decent paying job to support his growing family (he has a second daughter due in July), and he’s working to get his GED and his driver’s license. He deals with the stresses as best he can while keeping his head held high. “Trying to work hard and do the right thing sometimes stresses me out,” he says. “I gotta be strong minded and willing to do what it takes to make it happen.”

If Jermaine could go back in time and talk to the little boy he once was, selling palmetto roses and gambling on the streets, he’d tell himself to stay in school. And as for anyone else caught up in the criminal lifestyle, he has one piece of advice. “Turning Leaf,” he says, “It’s the truth.”

If Turning Leaf is truth (and we truly believe it is), we’re so happy we could share our truth with you, Jermaine! Good luck with job placement, and especially with your new daughter! Both your girls are lucky to have you in their lives!