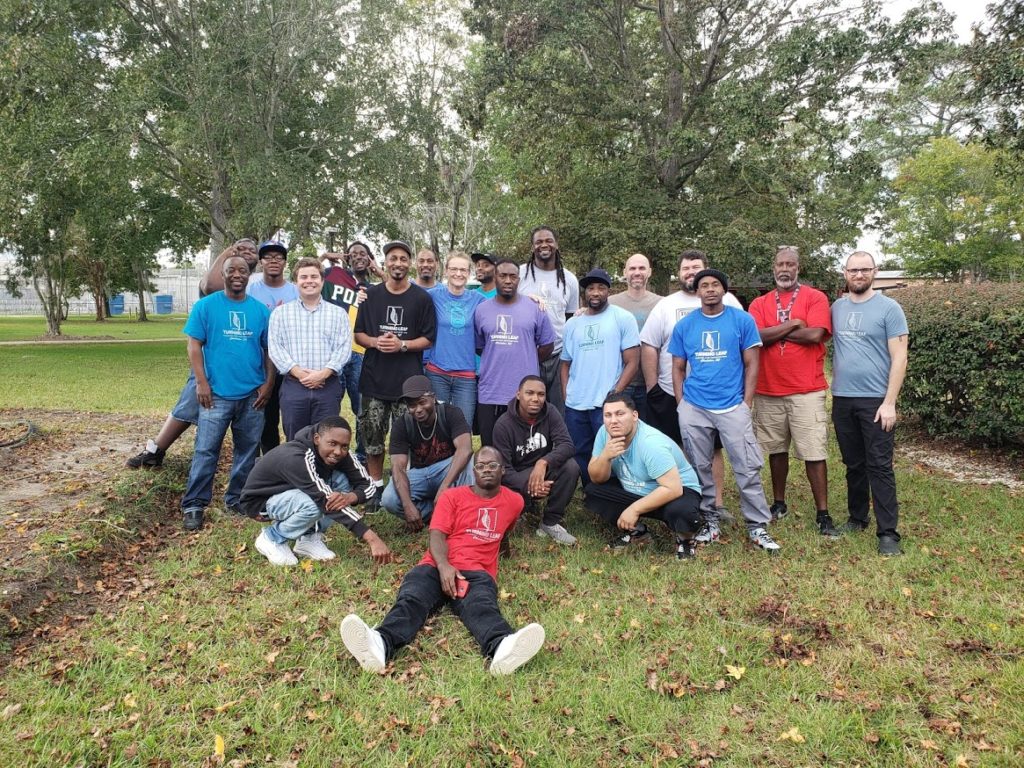 Founder and Executive Director Amy Barch begins volunteering at the Charleston County jail, teaching restorative justice classes and bringing victims of crime into the jail to speak to participants about the impact of crime. She eventually expanded the class to include teaching skills to develop emotional coping, thinking, and problem-solving skills. Within a year, judges were considering program completion certificates at sentencing and class graduates were receiving reduced prison sentences. Amy realized that the class had potential to be something much bigger. She quit her job and for the next three years built up a local base of support while developing a program model that follows evidence based practices shown to reduce recidivism. Hundreds of men enrolled in the jail-based program between 2011 and 2014.

By 2014 Turning Leaf had 501(c)3 status and support from local government, law enforcement, the judiciary, and business leaders. Amy developed a strong partnership with the City of Charleston Mayor’s Office and Police Department. A plan was developed to launch Turning Leaf as an alternative to prison program. A pilot group of eleven men were provided Turning Leaf in lieu of prison. The program consisted of in-jail group cognitive behavioral therapy classes and post-release help with securing housing, transportation, and employment.

The program received its first major grant from the City of Charleston. The Turning Leaf Center opened, which is the organization’s home base where students go for education and support after release. Amy was brought on full-time as the Executive Director and she hired one additional staff member, a Program Manager. Thirty-two men were diverted away from prison and into Turning Leaf as a condition of bond or probation. Each person was provided 100 hours of group therapy in jail prior to release with wraparound services provided after release. Each person was placed into a job at the City of Charleston or North Charleston.

The program was redesigned to focus more on delivering community-based reentry services and programming. In-jail services were scaled back and the program moved away from an alternative to prison model. Turning Leaf started over as a reentry program, focusing on helping men make a successful transition from prison. A Case Manager was hired as the organization’s third staff member. Participants attended half days of daily group therapy classes and weekly one-on-one counseling sessions to address many of the barriers facing men coming home from prison, including identification, transportation, and housing. After eight weeks, a person was considered graduated and placed on a full-time job with a local government agency - the City of Charleston, North Charleston, or Charleston County Public Works Department.

The Turning Leaf Center finds a new home at 3765 Leeds Avenue in North Charleston. Originally built in 1970 as the Coastal Pre-Release Center, the building is part of a larger complex that served as a minimum-security detention center for men nearing the end of their sentences before it was closed in 2014. The State of South Carolina leases the building to Turning Leaf for $1/year. In the new space, the program opens a social enterprise: the Turning Leaf Print Shop. The organization’s fourth employee, a Print Shop Manager, is hired. The program began providing part-time employment to participants with the most barriers to success.

Turning Leaf hires its first program graduate as a salaried employee in the new role of Peer Specialist. The program transitions into a full-day program. All participants are now at the center M-F from 9am -5pm, dividing their time between work in the print shop and group therapy classes. Men are paid for the entire work day. The four program pillars are now in place: 150 hours of group therapy, weekly one-on-one counseling sessions, transitional employment in the Print Shop, and placement into a job with a livable wage, benefits, and opportunity for advancement.

Job placement expanded to private industry to keep pace with enrollment. A sixth employee is hired, a Job Developer. Job placement in manufacturing outpaces placement in government agencies. The program’s target population is further refined. Based on impact data, Turning Leaf chooses to focus on men with past histories of violence, drug offenses, weapons and other lifestyle crimes, and exclude men with major substance abuse issues. The same year key program indicators reached benchmarks set by the organization. The percentage of men completing the program, remaining employed, and staying free from arrest were sufficiently high enough to indicate the program was reaching its goal of helping participants remain crime-free and out of prison. Turning Leaf leadership decided that the program should be rigorously evaluated to test its effectiveness at reducing recidivism. However, the program’s small sample size of 50 men per year posed a challenge to conducting a high-quality impact evaluation. In response, the organization decided it would open two additional locations across South Carolina and evaluate the three sites together. As a first step in executing this plan, an evaluator was hired to assess the adequacy of program process implementation in its Charleston operations prior to replicating.

An outside consultant was hired to conduct a process evaluation, which determined that Turning Leaf is being implemented as it was designed and can be replicated. Covid-19 shut down the Print Shop during the second quarter of the year. The Job Developer pivoted into a Print Shop Sales Manager role and launched a retail line to sell direct to consumers online. Therapeutic services continued to be provided during much of the pandemic, often in one-on-one settings or small groups. The Print Shop re-opened in summer of 2020. At the same time, the Black Lives Matter movement was underway and there were widespread calls for social justice reform. Turning Leaf was one of 20 organizations selected nationally to receive a racial justice and equity grant. A feasibility study was conducted to determine if the community would support program expansion. After receiving a positive response, the organization moved forward with planning a $3.2 million fundraising campaign to pay for two additional Turning Leaf centers across the state.

A Director of Operations and a Director of Communications joined the team to build the infrastructure for expansion. Turning Leaf announced that Columbia will be the location for the next location and launched the fundraising campaign. Five new staff were hired to open the Columbia location, and the name changed to Turn90 to allow for country-wide expansion and trademarking.