It’s important to note, however, that violence against Black people doesn’t just come from radicalized white men. The truth is most of the death comes from violence on the streets of cities across America. Cities like North Charleston, which remains Turn90’s home headquarters. The experiences of the men we serve bear that out; a recent informal survey found that, of the eight Black men in our Print Shop on a Friday afternoon, seven of them knew someone impacted by gun violence or death. When Malik told us his story, he spoke of at least four murders committed by Black men against other Black men, three of which have to date gone unsolved. 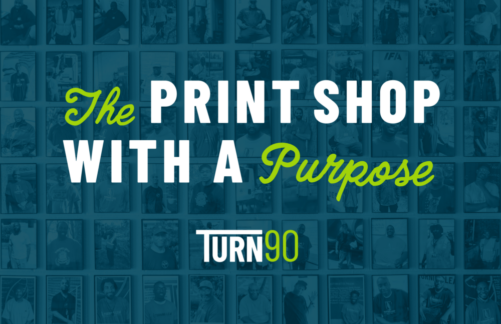 Our customers mean the world to us. After all, it’s your orders that make it possible for us to fulfill our social mission of keeping men from returning to prison!

So when we hear our customers say they need a change, we listen! Introducing DECO, a new way for you to request quotes and submit orders to the Turn90 Print Shop.

In this episode, Amy and Jeffrey discuss her path to starting Turn90, what the future holds for the organization, second chance hiring, reducing recidivism, and much more…