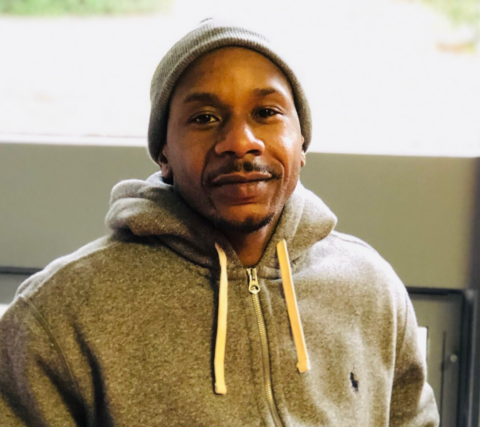 Visibility is key to a healthy childhood. Kids who feel invisible, unseen, tend to either fade into the background, or blaze forward into extremes. Both are dangerous paths to tread, with many obstacles waiting to drag you down.

This is the story of Tyrone, a quiet, private child who never had anyone tell him there was a better way to live. It’s our privilege to help him be seen today.

Tyrone grew up with a single mom in downtown Charleston. His mom was a domestic worker, cleaning hotels and private homes. She was often quiet; they didn’t talk much. Since it was just the two of him, Tyrone grew up quiet, too. In a way, this wasn’t awful. Tyrone developed a strong intuition about people, learning early how to read them and their intentions non-verbally.

Tyrone failed first grade, then third grade. Both times, he thinks it was because of language deficiencies, likely the result of his Gullah dialect. He didn’t like school. It’s hard for him to say whether it was his personality or the school system, but he felt disconnected from the material which didn’t reflect his history or experience as an African American. He failed 6th, 7th and 8th grade, too, but was pushed forward each year because he was too old to be held back. No one stepped in to help; no one saw how he struggled.

By 12-years-old, Tyrone was selling drugs. He looked up to the “men” in the neighborhood, and theirs was the criminal lifestyle. These “men” were 19- and 20-year olds who, according to Tyrone, “didn’t know any better themselves. That was all they knew. There might have been opportunities, but we never saw or heard of them.” When he dropped out of school in 9th grade, Tyrone began selling drugs full-time.

Tyrone was first arrested at 17 and it crushed his mom. When he went to prison her hair was black. When he came out two years later it was almost completely white. But he continued to sell drugs and continued to get arrested. “I thought about quitting,” he says, “but then I would ask myself, what else am I going to do? I had no education and I didn’t know anyone who wasn’t doing criminal things. It was my identity. It felt good that people knew my name and needed me. If I didn’t sell drugs, then who was I? I would be invisible.”

Selling drugs allowed Tyrone, finally, to be seen. That had to feel good to an invisible kid.

At 25, Tyrone was sentenced to 15 years in federal prison for selling drugs, but that didn’t make him want to change his ways. He had a plan. “My plan was to rob someone with a lot of money when I got out and use it to start a business,” he says. “Obviously, that was ridiculous. I know nothing about business. But I knew I would be coming out of prison at 40 years old with no education and no skills. But you need a plan to hold on to when you’re facing 15 years in prison. Something to hold on to when you put your head down at night.”

So, what changed? Tyrone says he was lucky enough to find a group of men in prison who mentored him. They were facing life sentences and weren’t going to have another chance to get it right, but Tyrone did. He also found faith in Islam. Slowly, he began to self-reflect. He thought deeply about his experience as a black man, and the beliefs he had taken on according to society’s stereotype of him and his failure in school. He’d lived those stereotypes out, just like society knew he would.

In prison he freed himself by finally rejecting the belief that he was unworthy, somehow less than everyone else. Tyrone says that in a prison yard of 1,600 people with access to every drug imaginable and regular violence and gang activity, he created a daily structure that kept him out of trouble. He did things in prison that would normally make someone a target – like tucking his shirt in and carrying books – but it was important to him to live by his newfound principles. His actions inspired other people in prison who wanted to change but didn’t know how. He was seen, heard, and he had finally found himself.

Tyrone was released in October, 2019. One day shortly after his release, he ran into someone who remembered him from prison and said Tyrone inspired him there with his attitude, demeanor and his principles. That person’s name was Edwin, and he had just graduated from Turning Leaf. Edwin told Tyrone that he wanted to pay the favor forward by giving him Turning Leaf’s information and encouraging him to enroll. Tyrone enrolled in the program based on the strength of Edwin’s referral.

We’re proud of you, too, Tyrone, and we know you’ll pay the favor forward when you see someone who could use our help.