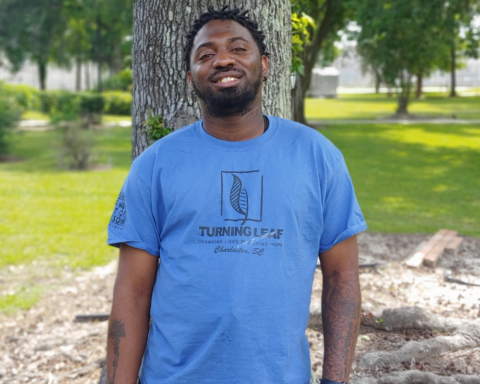 At the time of our writing this post, our country is tense. We’re in the throes of a pandemic the likes of which many of us wouldn’t have imagined in our worst nightmares. “Quarantine” and “lockdown” have become words well-known by the tiniest children. Incomprehensible numbers of lives have been lost to a virus we still know very little about.

In the middle of these ghastly losses, which affect people of color in overwhelming majorities, we all learned a single name: George Floyd. His gruesome murder, captured on film, was the spark that ignited fury this country has not seen since the riots of 1968. Black Lives Matter has reaffirmed itself as the current generation’s call to arms.

Amid this heady mixture of fear and anger sits Dewayne, a student at Turning Leaf. He, of all people, knows the true meaning of Black Lives Matter. At only 15 years old, he witnessed a black life ending violently from his own front porch. Since then, the violence continued, and its fear and guilt have shaped his world. Now he’s trying his hardest to leave it all behind, to raise his daughters into a brighter future.

This is Dewayne’s story

Dewayne grew up in Charleston with his mama and his grandma. His mama was a hardworking woman, often holding two jobs to support her son. “Sometimes she had it bad,” Dewayne says, “But she didn’t show it. She always made ends meet, and I never wanted for nothing.” They moved around a lot, every couple years trying a new place in a new neighborhood from North Charleston to Holly Hill, but that was fine. Everywhere they went, he already knew people, and he always fit in. Some neighborhoods were safer than others, though, a fact that would come to influence Dewayne’s life in unspeakable ways.

With his father out of the picture, Dewayne’s paternal grandfather, who he called Papa, stepped up to help raise him. They were (and remain) tight, even with all the address changes. “He always finds me and keeps in contact,” Dewayne says. “He wanted me to do right. He’d take me fishing, hunting. Always had me in a boat as a little boy. He used to tie me down to the seat so I wouldn’t flip over in the boat.” It was idyllic, at least sometimes.

When Dewayne was only fifteen years old, though, life threw a curveball he never expected. “I saw a dude get killed,” he says. “I was sitting in my aunt’s living room. I remember earlier that day we were at the pool.” There, he saw an older guy, Seymour, talking to some girl, and another man said threatened to kill him. “We all just laughed it off, like it’s a joke.”

Later, though, he heard some noise outside the apartment. Seymour was headed down the stairs, saying he was going to close his car windows to keep the rain out. “There was the sound of screeching tires,” says Dewayne. “I looked out the window and I saw him running between the cars. I heard a gunshot, and my aunt came out, asked what happened, and I said, ‘Seymour just got killed. He’s dead.’ Then my aunt went out and tried to bring him back to life, but he was dead.”

Paralyzed with shock, at first Dewayne didn’t feel anything. His uncle screamed at him to call the police, so he did. “I was on the phone with the police, saying ‘One of my friends is dead.”

Seymour’s body was left out in the rain for six hours before they took it away. Dewayne remembers wondering why they left him out there so long. The event had a huge impact on him. “From that day on,” he says, “I was like, shit. I have a feeling that someone’s gonna kill me.” And if you think your life isn’t going to last, why follow the rules, right? You’re just going to die in the end anyway.

Around the same time, Dewayne and his mama started butting heads. She kicked him out, then filed a runaway report, so police found him and brought him home. They fought, and she kicked him out again. He stayed with friends when he could, and started breaking into cars, stealing radios and speakers to sell them off to make cash. His first brush with the law came at age 16, when he got caught stealing a CD player from a car. He only received 180 hours of community service, mainly because his football coach at the time was a state trooper who vouched for him. “He told the judge, ‘He’s a good kid, cut him some slack this time,’” says Dewayne. But his troubles – and crimes – only escalated from there.

Dewayne moved into rougher territory, trying to make ends meet. Armed burglaries, robberies. He caught his first charge at age 20: attempted murder and armed burglary. He did two years in County, where he raised hell fighting and stealing, before receiving a suspended sentence and getting out on probation. Four months later he violated probation, and was in and out of prison, racking up charges, from that moment on.

The armed robberies, it seemed, weren’t going to get him anywhere, so Dewayne turned to selling drugs instead. Still, he was in and out of prison, labeled a gang member for his associations with friends. Both his daughters were born while he was in prison for various crimes. He’d never given much thought to being a father, “but when I saw her [his first daughter] for the first time,” he says, “It was real.” A new life was starting…but other lives around Dewayne were ending, all too fast.

In 2012, one of Dewayne’s friends was killed downtown at the Music Farm, a murder linked with gang activity. Then, right after Dewayne’s release from a two-year-sentence, two friends (a man and a woman) called to see if he wanted to go to Myrtle Beach for Memorial Day weekend celebrations. “I said ‘I know I’m gonna get drunk and do some crazy shit,’ so I said no,” he says. Those two friends were killed outside a club in Myrtle Beach that weekend.

Then, in 2018, Dewayne’s ex-girlfriend died in his arms outside a club while he was out on parole, killed in a confrontation with other people while they were all drunk and on drugs. He says, “The last words she said to me were, ‘Please pick me up so we can leave.’ We were waiting for the ambulance, and she took her last breath. She was supposed to pick up her son from his daddy’s house the next day.”

“I think about that every day,” he continues. “If I hadn’t reconnected with her and we hadn’t gone out that night, she’d still be with her child. She tried to leave that night. I should’ve let her go.”

The guilt was maddening, and so was the fear. His crimes spiraled even further out of control, and in the years of 2017 and 2018 Dewayne caught 13 total charges. They were mostly PWID (possession with intent to distribute), with assaults mixed in as well. No drugs were ever found on his person however (he would leave them behind when he ran), so nothing quite stuck. Pleas deals kept his sentences to a minimum, until he found himself facing two years at the Kershaw Correctional Institution. He had to do the time, and his second daughter was born while he was there. He was starting to think maybe he had to make some changes to be alive and free for his girls when he received a letter from Turning Leaf, inviting him to come after his release. Everything in that letter made sense. He looked at his options: return to hustling, where his friends were literally dying, or give Turning Leaf thing a try.

“I ain’t trying to be dead,” he says, laughing. “I dodged a whole lot of bullets. I could’ve been dead a lot of times. That must mean something.”

He came to Turning Leaf. Here, he found a place where there’s always a second chance for everyone. “It’s helping me reshape my mindset, to make a better life,” he says. “A second life. I’m the same person, I’m just in a different lane. I’m making better choices to put myself in a better place.”

When faced with a decision now, Dewayne knows to stop and think, and to take a deep breath. His family is so proud of him; his grandfather still calls him every single day. He did have to learn to play Barbie with his daughters, but that’s okay. “Having somebody call you daddy…that feels real good.”

“I’m a good-hearted person,” he adds. “If you need help, I’m gonna help you. I’m really loyal. But there comes a time in life where you gotta get yourself right before you can focus on anybody else.”

Dewayne’s past may have been shaped by the violent loss of black lives all around him, but we’re sure that his future will be full of life and laughter. So we ask you, in considering the world around you, to remember that every black death is far more than just a number. Black lives matter, and we are so proud of you, Dewayne, for putting your own life on the right track.