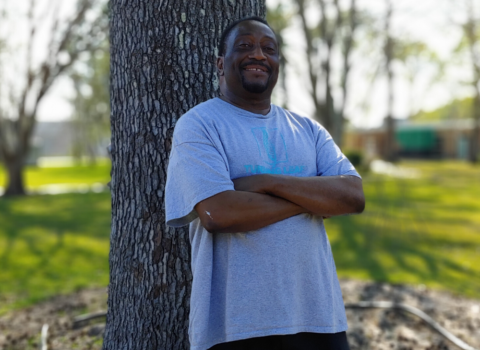 Sometimes it’s the lure of a life lived in the “extra” lane that sets you on a rollercoaster that has the highest highs you can imagine…but also the lowest lows.

That was the case of our student, Eduardo. He wanted more than a regular life could give. To listen to him speak is to listen to someone who has seen it all and has somehow lived to tell the tale. It was our honor to sit down to listen to his story, and as we share it with you, please remember: be careful with the choices you make. The crime lifestyle can be tantalizing, but the consequences can be tremendous.

Compared to some other Turning Leaf students, Eduardo had it all when he was a kid. His mom was a strong, hardworking woman. “She did everything in her instill the best in me,” says Eduardo. “I had decent clothes. We went to church. On vacation.” Eduardo was a good kid. He played peewee football and won a championship trophy in 1972, when he wasn’t even 10 years old. School had its up and downs, but by high school Eduardo was taking advance classes and showing promise.

That said, Eduardo always wanted to be with the older guys, doing what older guys do, having the cool things older guys had. The clothes, the sneakers, the chains. When he was 13, he got his first summer job, cleaning up at an elementary school with older boys. For the first time he could buy his own clothes, as nice as theirs, and fit into their world. He also smoked marijuana for the first time, keeping up with those older boys. “That’s why I can understand peer pressure,” he says. “It plays a big part in people’s lives.”

Maybe marijuana wasn’t a huge deal (yet), but in 10th grade, some jokes with another boy in class got ugly. The other boy got the best of Eduardo, making him feel like a fool in front of all the other kids. The next day Eduardo took a pistol to school and shot the boy three times. “And that’s where my troubles began.”

He served 7 months of a 3 ½ year sentence, a slap on the wrist all things considered. But when he got out, he was already used to a particular lifestyle, and sticking to it felt right. He sold marijuana to earn cash, and when his mom found out she kicked him out. When his neighborhood got raided – he still has a scar on his belly from running from the police that day – Eduardo’s older brother came and took him to live in Georgia. He gave Eduardo a job washing dishes in the restaurant he managed but washing dishes doesn’t pay those “extra” bills.

And “extra” is what Eduardo wanted. At the restaurant, he met some guys involved with local gangs. When one of them said Eduardo looked like he used to hustle, Eduardo wanted to impress him. “I said yeah, and then he said ‘I’m gonna get you the chance to make some money.’”

This was 1980, before Ronald Reagan’s war on drugs began. Eduardo met a guy who handed him $10,000 and more marijuana than he could ever smoke himself, and it opened up a door Eduardo “could never have imagined.” This was Eduardo’s “starter kit.”

From there, Eduardo was all in. He was selling drugs. Doing them, too. Marijuana, cocaine, crack. He partied hard. He had money for all the things he wanted: gold chains, a beeper, and even a Cutlass Supreme. He met a guy with connections in Miami. They stayed out partying, making money hand over fist. Eduardo had women, houses, everything he’d ever wanted and more. It was like a party that would never end.

All parties end, though. First there was a disagreement with an associate when someone was skimming off his cut of the profits. There was an arrest for possession with intent to distribute. Another slap on the wrists, a year of probation. Then another associate sold Eduardo some stolen furniture, setting him up for another arrest. This time he served 18 months for probation violation, and when he got out, he had nothing. No money, no parties. He had to start from scratch in the only business he knew that made enough money to live the lifestyle he was used to. He was building back up when he got picked up on another charge and sentenced to 12 years. This time he served 7 months.

After that, his girlfriend begged him to stay clean, but the thing is: that was his way of life. Selling drugs is what he did. She kicked him out, so Eduardo moved back to Charleston to be with his mom for a clean start. Her house leaked when it rained and he wanted to fix it. Working two “straight” jobs wasn’t giving him enough money, though, and as it turned out, no one in Charleston knew where to get cocaine.

Guess who knew? And guess who got right back in the life of crime?

The highs were even higher. He had connections in Cuba and Atlanta, Miami and Columbia. Making upwards of “half a million dollars, easy,” each week, Eduardo had four houses, all the drugs he wanted. One of his sons got in the business with him. He was living large and loving it.

Until a drug deal went sour, and Eduardo didn’t get the drugs he paid for from a contact in Columbia. He tried to be patient, and counseled his cousin, who was in on the same deal deal, to wait. His cousin couldn’t wait, though, and got busted on a small-time deal in the middle of a highway. When they caught Eduardo’s cousin and brought him in, the police told him, “’Either you bring us Bin Laden or you bring us your cousin’…and he sure couldn’t bring them Bin Laden.”

They busted Eduardo, for real this time. “There were two armored cars, an armored tank, firetrucks, an ambulance,” he says. “They started looking for me at 2:30 and didn’t catch me until 9:30.” He was sentenced to 20 years, two years in high security after he put his hands on an officer in prison.

Ten years into his sentence, Eduardo lost his mother. She passed away without his having the chance to say goodbye.

Prison gave Eduardo a chance to begin to turn his life around. A two-year-stint in a drug rehab program was a huge help, and when he was released after 15 years, a chance encounter in his halfway house with a student at Turning Leaf brought him to our doors. Here, he’s working hard to learn how to analyze his choices. He uses the tools he’s been taught to keep himself out of trouble, and away from a life of crime.

“I ain’t a bad guy,” he says, in looking back on his life. “I was young, and I chose the path I did because I wanted to be in the ‘in crowd,” but that wasn’t the right thing to do.”

He’s paid for his crimes, in prison time and beyond. He’s learned hard lessons along the way. “I had two sons. I lost one – he got killed by law enforcement. And the other got 40 years in prison. I failed them. If I could turn back time, I would, but I can’t. If you have someone you care about, you got to show them you really care. Because once they’re gone, you can’t. I wanted to be a loving father, but I took the wrong path. You can live a good life crime-free.”

Yes, Eduardo, you’re 100% right. You can life a good life crime-free, and we believe you’re on the right path to get there. Good luck, friend. We are here for you always!