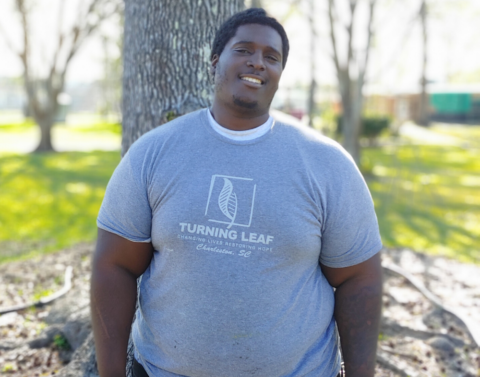 Drew is one of our youngest students. At only 23 years old, he’s seen more of life’s ups and downs than many people more than twice his age. In fact, he’s seen enough to know there has to be a better way. He’s at Turning Leaf to find it.

This is Drew’s story.

Growing up in the projects of Miami wasn’t exactly idyllic, but it didn’t start out too badly. “I had candy,” says Drew. “I could ride bikes with the other kids. We’d stay out till the sunlight was gone.” His mom was strong and present, but when Drew was five years old his father was caught up on a federal charge and wound up serving ten years. His role models shifted to his older brothers who were already experiencing the darker side of Miami.

“I grew up in a family with a lot of ‘known’ people,” says Drew. From a young age, he already knew there were rules to the streets. There were certain areas he could go to, and others he couldn’t. As he grew up, proving himself to the older boys was crucial. “It was a lot of showing out,” he says. “Once I got older, they could see I could do all this stuff without issue. It was stuff they wished they could do, but they were scared to do it themselves.” Maybe there was another way to be, but he couldn’t see it at the time. “I had to make a name for myself.”

As Drew hit his late teens, he still wasn’t 100% committed to the street life. He was still trying to go to school, playing ball, but his street friends were what mattered to him. As he says, he was living “one foot in, one foot out.” There were crimes – burglaries, mostly petty – that garnered slap-on-the-wrist punishments and brief stints in juvie. He thought it would go on like that forever.

Then came a bloody day in 2016. Drew was out on bond for a strong-arm robbery case in which he and some of his friends mugged a classmate whose mother happened to be a police lieutenant. That slap on the wrist was definitely going to sting more.

Still, it was just a normal day. Drew and his boys were in the streets, sitting on the tank (their name for their building’s electrical unit), doing their thing. They had a pistol but weren’t actively looking for trouble. Suddenly, bullets began flying. A few guys from a different group ambushed them and began shooting from the bushes. “They killed my homie in front of me,” he says. “I can replay the scene like yesterday, with bullets flying by you. I know the last words my dog said. I know what he sounded like. I know what he did to himself.”

Not only did that traumatic event lead to more jail time for Drew, whose involvement exacerbated the prior charge and led to new ones, but it also led to a change in mindset. “I used to have a f*cked up mindset,” he says, “like, this person’s gotta die. But once I saw it with my own eyes, like when it happens to your loved ones or your friends…that sh*t ain’t no pretty sight.”

Mostly, too, he wanted to be better for his mom. “She’s my rock,” he says. He’d tried to take care of her through his crimes prior to being locked up, giving his mom $300, $500 every week or so to help support her and his younger siblings. But he feels like he didn’t do enough. “I had thirteen thousand, fifteen thousand dollars in a shoebox sometimes,” he says. “I blew threw it a couple times. I’d empty it out, fill it up, but I never gave her [his mom] any real money.”

And yet, when he needed money for bond and a lawyer, she didn’t think twice. “The lawyer wanted seven or ten thousand,” says Drew. “She did it without a sweat.” That she did it by emptying out her 401(k) retirement fund is a thing Drew regrets. His mom worked hard for that money, and she spent it trying to keep him out of jail.

It didn’t work, or at least not exactly. Drew spent about 13 months in prison after his friend’s death, and who was there to pick him up when he was released? His mom.

After she moved to South Carolina to be closer to her parents, Drew stuck it out in Florida for another year, moving to Fort Lauderdale to be with his older brothers. There, while trying to live a better way, he says, it was hard with his brothers still involved on the streets. “I’m trying to run from it, but I keep winding up in it.”

So he moved to South Carolina be with his mother. It wasn’t a smooth transition. He smoked a lot of weed before the move, relying on a special drink to flush his system before required drug tests, and although he gave it up for nine months after his move, soon he found himself smoking again. “I started smoking again, just to be in a relaxed place.” He knew he had to stop.

When he heard about Turning Leaf, things began to change.

Today, Drew is in week 10 of the program. He is almost finished, and I have been able to watch him open up and begin to believe he can have a better life. He believes the skills taught at Turning Leaf make his life better. “I’ve learned to be myself,” he says. “Growing up, I had to prove too much. Here, you don’t have to be the toughest.”

He believes in the hard work Turning Leaf asks of him. “Think of Steph Curry. He shoots 3-pointers all day, but he’s still in the gym, working hard.”

Drew looks up to the older guys in the program and been motivated to not spend decades in prison before making a change. He shared this story of how the skills have transformed him into a different man.

He was playing basketball one night with another student, and someone at the court was pacing back and forth, looking like he wanted to jack Drew’s phone. Drew grew heated. His old belief of “get him before he gets me” kicked in, but the other student reminded Drew to think about how a confrontation would play out. Drew paused, put his hands to his head, took a deep breath, and walked away. It wasn’t worth it to throw away everything he’s been working on just to prove a point. He has too much to lose. “I am the man that can get upset and still walk away and that feels good!”

He wants to make his mom proud, but he wants to do it in the right way: the way that keeps him out of prison. The way in which he doesn’t end up being killed like his friend. The way that gets him closer to reaching his goals of having a career making good money and living a good life.

Drew, you’re on your way man! You have an entire team behind you! You have what it takes to succeed.