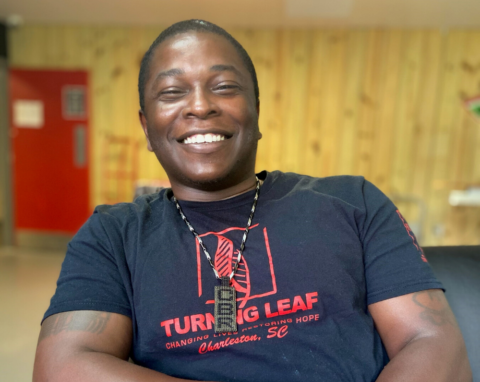 We talk a lot at Turning Leaf about the factors that lead a young man to the street life. There’s the lack of education; poverty; the temptation of the right clothes, women and jewelry. Sometimes, though, the street life is all a boy knows. He’s born into it, raised in its clutches, and never even knows there’s another way to live. He knows guns equal power, and power is everything.

This is the story of Shalik.

Shalik grew up in Far Rockaway, Queens, New York. A child of the late 1980s, his was a world in which the war on drugs raged, and “just say no” was never an option. As a small boy he collected empty crack vials for fun. He lived in a nice house with his mother…his brothers…his sister…his aunties…his uncles…his cousins, too. It was overcrowded, to say the least, and while his mother wasn’t directly involved with the street life, his aunts, uncles and cousins were. “My auntie might take me to the sneaker store,” he says. “She’d tell me to take the old sneakers off, put the new ones on, and walk off. My uncle might tell me to hand a package to a person.”

The street life was Shalik’s life. In New York, he says, “people are more aggressive because the population is so crowded. It’s a fight to get on trains, busses, things like that.” He knew basketball and football, sure, but also how to blow up a phone booth with an M-80 firecracker. He knew how to hop the train to avoid having to pay. He knew it all.

His father was in the federal system when Shalik was very small, and on his release he moved to California. After Shalik accidentally broke a teacher’s leg (“I kicked a heater and it fell on her leg.”), his mother sent him there to be with his father. “It was a culture shock,” says Shalik. Both life in California, and life with his father.

Shalik’s father tried to implement structure, with chores, bedtimes, etc., ut Shalik made a lot of mistakes trying to fit into this new lifestyle. “My dad was the smartest man I ever met, and the strongest man I ever met. He was more determined than anybody I ever met. He’s big on education. He just didn’t show his affection real well. He over-punished, and that made me feel vulnerable.”

“Over-punished” meant abuse for young Shalik, who was trying and failing to fit in. He was only 10 years old, and he was in a new state and a new private school with kids who were different from him. When kids started trading Pogs and Shalik didn’t have any, he waited until his class went to PE, stayed behind, and stole every Pog piece from every backpack in the room. Along the way, he also poured water on the computers in the classroom. In New York, he says, he might not have even gotten suspended for such shenanigans; in California, the school called the police.

Between his antics in school and the abuse at home, something had to change. His father’s girlfriend called Shalik’s mother, who flew out, packed Shalik up, and sent him to live with his grandmother in Orangeburg, South Carolina. There, he stayed out of trouble for a couple years at least, but the creeping feeling of vulnerability brought on by his father’s abuse stuck with him. When he was 13 and some boys jumped him at a bus stop, he ran home to his grandmother’s. The house was empty – his grandmother and her husband were at church – so he found a 12-gauge shotgun and ran back to the kids who’d hurt him. He didn’t shoot, only threatened to, but the police got involved again. But that day, Shalik learned the power of a gun, and he gained a reputation to protect. “From then on,” he says, “it was trouble, trouble, trouble.”

Shalik – the tough kid from New York by way of California – was suddenly popular. He and his new friends started breaking into houses. “I was always the first one in and the last one out,” he says. “I had to protect my image.” They stole guns, jewelry, electronics. Shalik loved music and was always on the lookout for speakers, stereos, things like that. He got busted with a friend one day, and after a three-month evaluation in Columbia, the system wanted to commit him. Instead, his father intervened and conviced the judge to send Shalik to Georgetown Marine Institute, a military school designed to help troubled kids.

The school had its ups and downs. “It helped a lot,” he says, “with discipline, respect, and physically. It helped with my education because I was far behind.” They ran the school like the marines, and when Shalik left, he was different. “I had respect for elders,” he says. “I had discipline.”

But it wasn’t enough to keep him on the right path, and soon, the charges – and the prison time – added up. There were drug trafficking charges. Possession of firearms. He did a few years here, violated parole, a few years there, violated parole again. There was a 10-year sentence, followed by a 5-year sentence. Shalik’s days in the system outnumbered his days on the streets.

Through it all, there was one constant in Shalik’s life: music. “It’s my stress reliever,” he says. “My meditation. I picked up my pen and pad even when I couldn’t spell. I’d write things only I could understand. Things that were just for me. I put my music together to get my thoughts out of my head.”

While in prison he wrote:

Many nights in jail I pace my cell
Write rhymes, receiving mail
It helped me face hell, was not a game
These people went from whips to chains
Modern day slavery but it’s all the same
First time offender getting 30 years for cocaine
Life for crack, no parole just cuz he black
Turn around and call him sex offender just cuz he jack
In fact, they’d rather see him hugged up with a man
Saying that’s more respectful than having his **** in his hand
But he only 23 years old, been there since he was 18 for taking the wrong path and road
No time to enjoy life before they snatched his soul
Sometimes he having thoughts that he should have told
Watching people go back to court like they handing out gold
But that ain’t the way he was mold
Real men don’t fold
He’d rather soak in gasoline and put light to his clothes
Today is just a bad day
From the way things look today his birthday and he ain’t got a dime in his books
His locker empty so he feeling down on his luck two weeks before they post
So he knew that he’s stuck
But he’s a strong black man, he gonna keep his head up
Stay strong, black man, and keep your head up

Shalik estimates he’s been incarcerated for 19 of the 35 years he’s been alive. That’s more than half his life. In prison, he lost his father. Later, he lost his little brother. That hurt him deeply. The two had grown close in 2014, building a bond and taking care of each other. Shalik was on parole; his brother was on probation. They took care of each other, went on dates together, played music together. He was murdered, and Shalik couldn’t attend his funeral or be there for their mother. That was his turning point.

Today, Shalik is in a halfway house in Charleston, and enrolled in Turning Leaf and working hard. He says it’s a shame the program is only for people who have been incarcerated. “These skills are helpful for everybody,” he says. Nights and weekends, he goes through the skills with his mother, his sister, his girlfriend – basically anyone who will listen. “Our whole society needs this. The awareness levels, logic, and using good, sound judgment. It could help everyone be more stable.”

“I’ve got a strong spirit,” Shalik says. “I’ve been through a lot. I did a lot right, and I probably did a lot wrong. But through it all my spirit’s never been broken…I’m somebody you can plug into when you need that smile, that lift.”

We love you for your spirit, Shalik, and with your music to guide you and the skills you’re learning at Turning Leaf, we know you can live a beautiful life.