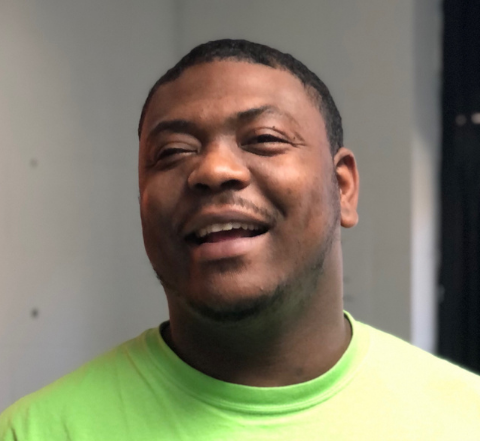 It’s funny how a single decision can change the trajectory of a person’s life. Sometimes it’s not even your own life. Those of us with children or who work with children know we can say or do things – sometimes without thinking about it – that affect a child in monumental ways.

In Terrell’s case, it was a basketball coach who cut him from the team in 10th grade who completely changed his life, and not for the better. But after weeks at Turning Leaf, Terrell would be the first to tell you: it’s not the coach’s fault he’s spent a total of 12 years in prison. No, that’s on Terrell.

But he also knows: he has the power to change his own life, for the better this time, using the skills and work ethic learned daily, in class and on the Print Shop floor at Turning Leaf.

This is Terrell’s story.

Terrell grew up in Columbia, South Carolina, and it was always a little rough. The streets always called. When he was only five, his father was pulled over by the police with little Terrell in the car. The cops found drugs, and Terrell’s father didn’t want DSS called for his boy. He wanted to get the child to his grandmother’s house.

Terrell’s father made a choice that day. “He fought the police,” says Terrell. “He beat them up, took me to my grandma’s house, and then waited for the police to come. He got 15 years for that.”

His father stayed in the picture, even from jail. “He raised me through the phone,” he says. “He told me to stay positive. He told me to play sports and supported me even though he was locked up.” Terrell went to see him every weekend.

It was mainly Terrell and his mom from that point on, though. Terrell was a good kid, involved in school and basketball. In fact, he was so good at basketball he played varsity ball in 9th grade, a power forward who could also play center. He had a scholarship waiting for him at Coastal Carolina University. College was on the horizon and things were really good.

The summer before his sophomore year of high school, Terrell spent a lot of time working. He’d cut grass, wash cars. “My mother instilled in me that I had to work at an early age.” She’d still buy him what he needed, but those things he wanted – the nice school clothes, movies with his friends on the weekends – he had to work for. So he did, all summer long. But Terrell’s schedule of odd jobs kept him away from summer basketball practices, and by the time he went back to school in August, the coach told him he was cut from the team.

“Basketball was my motivation for school,” he says. He dropped out, lost his scholarship, and things snowballed from there.

“I joined gangs then,” he says. “I was looking for unity. My dad and I fell out, too. He was trying to teach me to be a better person than him, but I was like, ‘How you gonna teach me something when you’re in jail?’” His mother told him he couldn’t live with her anymore, not if he wasn’t in school, so he went to the streets.

He started small, stealing rims off people’s cars (usually from the bigger dealers in the neighborhood). The older guys took notice of him. “They saw my hustle mentality,” he says. “I never asked anybody for money…I asked to wash their cars or cut their grass. I asked to do something to make money, so they saw I was ambitious.”

Those guys set Terrell up as a lookout, keeping an eye out for cops while they did their thing. Soon he was selling drugs, and then he started robbing people too. It’s an addition, like a drug. “I was addicted to the power of robbing,” he says. “I can see that now. If you hold a gun to somebody you can get whatever you want from them. But that’s not the right way.”

Terrell caught his first charge when he was 16 years old. Aggravated robbery and attempted murder. He and his friend needed money to buy cigarettes and weed early on a Sunday morning. They decided to rob a paperboy. Things went south when the paperboy didn’t want to be robbed. He wouldn’t hand over the money, and Terrell’s friend shot him. “The plan was for him to scare the paperboy with the gun and then I’d go in his pockets. But that didn’t happen.” While he didn’t shoot the gun and his homeboy took the majority of the rap, Terrell still received a 27-month sentence in a juvenile facility.

The Youthful Offender Act – YOA – meant that if he stayed out of trouble for two years following his release at 18, Terrell’s record would have been expunged. That didn’t happen though. He caught a gun charge, did another ten months, then after that a charge for armed robbery. That time he served three full years, with zero hope of clearing his record.

By the time he got out, Terrell was 21 with three major charges on his record. When the feds caught him a year later, nabbing him for distribution of crack-cocaine and felony possession of a firearm, they sent him away for six and a half years.

It was time for Terrell to re-think his ways, he realized. He says, “To me, prison was a place to rehabilitate yourself. You have to think about what you did wrong and how you can fix your mistake. Prison can make you worse if you don’t take the tools they give you and run with it.”

To Terrell, those tools include a routine of getting up early and getting to work, something he now uses in his daily life at the halfway house. “If you wake up at 5:30 in the morning,” he says, “and get busy working, you can have a job.”

Turning Leaf has enabled Terrell to take those tools and run with them, exactly how he wanted to. He was referred to us by another resident of the halfway house, and once he talked to Justin and Blue, he knew he wanted to take the program seriously.

“I see a change in myself already,” he says. “Turning Leaf is teaching me work ethic, how to be responsible. I can walk away from a situation now before it starts. The 25 skills they teach – you can use them in everyday life. You can even use all 25 in a single day if you need to.”

Terrell’s mother can see the change too. Through everything, she’s always stood by him. Always hoped. Always prayed. He says, “Right now she’s very proud, just as proud of me as she’s ever been. She can ride down the road at night and see the police and know it’s not me in the back of their car.”

The future looks bright for Terrell. He’s looking for a place to live when he gets out of the hallway house and hopes to stay in Charleston. One day he wants to own his own business.

We definitely value you for your sense of humor, Terrell, and your work ethic. We know you’re going to go so far in this world, and we’re so proud of you.