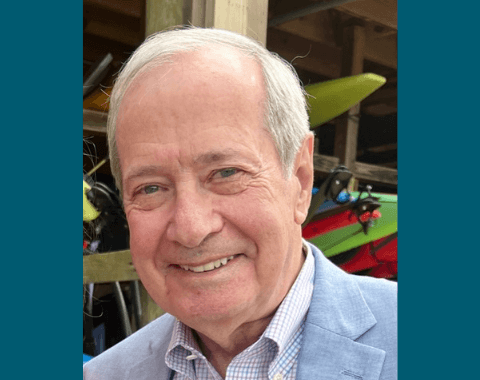 It takes a special person to support a nonprofit from the ground up, walking by its side through bumpy roads and hairpin turns. Turn90 is lucky; since its earliest days, Board Chair William “Bill” Finn has been there. He helped raise the funding to launch Turn90 as a viable nonprofit that has helped hundreds of men find success after prison. He’s been there through program redesigns, changes to locations and names, and even a global pandemic. Today we’re excited to tell you a little about him.

Originally from Boston, Finn came to Charleston in 1982 with AstenJohnson, a global industrial manufacturer for which he began working as a college intern in the late1960s. He would eventually become the CEO/Chairman and then Chairman of the AstenJohnson Board finally retiring several years ago after 50 years of service.

Giving back has always been an important part of his life. Finn is the Business Advisor for the Schottland Scholars program at the College of Charleston, School of Business. He’s one of the founders of the Charleston Regional Development Alliance, which was instrumental in the redevelopment of the area’s economy following the closure of the Naval base. He is also past Chair of Trident United Way Board, past Chair of the South Carolina Manufacturer’s Alliance, is on the Santee Cooper Board, and is currently Treasurer of SCETV Endowment.

Finn is also an avid boater. He loves being on the water, especially on his express cruiser, the Liberty.

He met Turn90 founder Amy Barch early on, while she was teaching classes in the local prison on a volunteer basis. A mutual friend introduced them, and over lunch, Barch explained what she wanted to do. “It was so clear how excited she was to try to help these men who didn’t have much an opportunity to succeed,” he says. “By the end of lunch, when she asked if I would help, I couldn’t say no. I was completely hooked.”

Best of all, he’s also never looked back.  With help from numerous others, Barch and Finn launched Turn90 (then called Turning Leaf) as an official 501(c)(3) nonprofit organization in 2014. Since then, they have worked together with a growing and excited Board of Directors to expand the program to include a social enterprise and open a second center in Columbia in 2021. With their hard work and dedication, a third center will open in Spartanburg in 2023.

Finn is very proud of their work. “We’re doing great things to help a group of men who really need and appreciate it,” he says. “Seeing our success in Charleston and now Columbia gives us the vision that we can do this nationally, helping more and more men who need the services of a place like Turn90.”