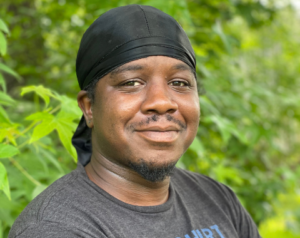 Born in North Charleston, Tonio spent his early childhood in West Ashley with his two brothers and sister. His daddy was in the Navy and was away a lot; he and his siblings lived with his mom and his grandparents. Money was tight. His mom worked – sometimes two jobs – and his grandparents and uncles helped where they could.

From his earliest years, Tonio says, “You had to hide your emotions. You know how children bully. ‘Oh, he’s soft. He’s crying.’ You had to fight a lot sometimes.” And so Tonio learned to solve problems with his fist, hiding all his emotions but anger.

In third grade, Tonio’s mom moved them to North Charleston, which on many levels he loved. His new elementary school had dances. He played basketball, went swimming with friends, and had sleepovers on the Air Force base across the street. Sometimes when his father wasn’t deployed, he’d go on trips with him to Memphis, Tennessee, or Ripley, Mississippi. Life was pretty solid.

And yet, his new neighborhood had a dark side, although Tonio didn’t quite realize it at the time. “It was regular,” he says. “Like drugs, people selling drugs. Watching people fighting the police, running from the police.” Regular, indeed.

When he was eleven, he witnessed a shootout between two drug dealers. “I guess they were fighting over who was serving on what street and how much,” he says. “They just started shooting at each other. There used to always be gunshots, so it was a little scary, but not too bad.”

As for school, he says, “I didn’t apply myself. I got in too much trouble. I used to get expelled for fighting and goofing off. I should’ve paid attention because I could’ve done the work.”

By the time Tonio was 14, he’d been in a lot of trouble already. He also knew money was tight. “My mama could only pay the bills,” he says. “She couldn’t give us certain things.” Tonio knew a quick and easy way to make money: he began selling drugs. “Weed, crack, coke. I needed the money for myself, and then I started helping my mom pay the bills.”

By 19 he was a high school dropout and a drug dealer with a child. He was starting to see people getting arrested, shot, and robbed on the streets, but didn’t know how to get off them himself. He began carrying a gun.

Tonio’s anger began getting the better of him, and he began catching charges. The most serious was an attempted murder. Tonio had a few kids already, and a couple of baby mamas. One of the baby mama’s brothers and cousin had beef with Tonio and confronted him. They had a knife and tried to cut him. One of the men poked Tonio in the forehead with his finger, and Tonio’s temper turned red hot. He pulled out his gun and shot the man, then escaped to his mama’s house.

That charge was eventually dropped.

But there are only so many charges that you can beat or that get dropped, and Tonio’s temper was by no means under control. It came to a head one evening. Tonio’s baby mama was dropping off his youngest daughter, who would spend nights with Tonio while her mama worked third shift. It was soon after his father passed away, so Tonio’s emotions were already heightened. The baby was sick with a cold, and the stress got the better of both parents. “We started fighting, and I got arrested,” he says.

Tonio served 18 months in the state prison system and, he says, “I won’t ever let my anger get the better of me again.” Although his sentence was minor compared to those of the men around him, the experience was enough to make him know he needed to change.

They cut off his dreads, for one, which was a blow. The ten vials of blood they took from him on his first day were another. He found the entire experience dehumanizing, describing prison with words like “chicken coop” and “cage.” He saw a man who needed emergency medical care sit in his cell for almost two hours before help arrived. Prisons across the country are severely understaffed, and even those with the best intentions can’t always help the people who need it.

“Prison is whatever you make of it, though,” says Tonio. He chose to start working on himself. “I went to school to work on getting my GED and I got a job in maintenance.”

He learned about Turn90 prior to getting out. He brought a flyer to his Program Manager in Trenton Correctional Institution and they called Justin together on speaker phone. Justin told Tonio to come in after he got out, and Tonio hasn’t looked back.

“I knew I needed to see a change in myself,” he says. “I couldn’t always help myself. I’d go about things in the wrong way. But the Turn90 skills have taught me a lot. I use them on the daily. They teach me how to have a smooth head if someone makes me mad. New thinking, responding to authority, distancing yourself from the people you don’t want to be associated with. Turn90 is teaching me so much.”

Tonio is seeing the change in his life outside Turn90. He’s set boundaries to keep himself out of trouble and is the Turn90 Employee of the Month in the Charleston Center for June. He’s working hard on his GED and has already passed Language Arts, Social Studies, and Science. Math has been a little problematic but Tonio knows if he puts in the work he’ll pass, becoming the first-ever Turn90 current participant to get his GED. The whole team here is behind him. We see him putting in the work every day.

So what does the future hold for Tonio? “I’m going to get my CDL so I can drive trucks. I want to save up to buy my own, and then, I want to be able to help people like Turn90 helped me. If I can give someone a job or some other help, I will.”

We know you will, Tonio. You’ve got a beautiful future ahead of you, and we’re so proud of how far you’ve already come!