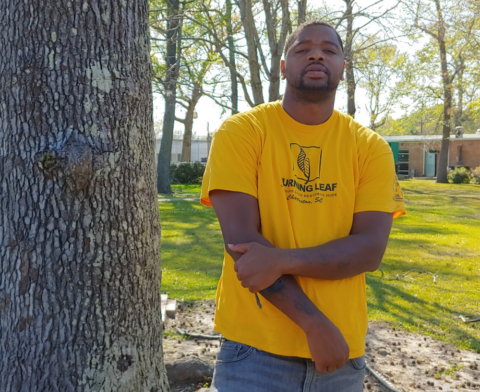 We are so proud of how far you’ve come, Sinclair! Thank you for sharing your story.

Sinclair’s childhood was loud: seventeen people lived crowded together in his grandmother’s 5-bedroom house. He was surrounded by sisters, cousins, aunts, uncles, but most especially his parents and his granny. Granny’s rules were strict, he says. “You have to be in the house before the streetlight comes on. If you ain’t, she’d send an uncle to come look for you, and you know once they come looking for us, it’s over. The belt is coming.”

All those children piled into the single house because it was close to school; if they stayed there, they could get to school every day without having to take the city bus. Sinclair’s granny was a positive influence, or at least she tried to be. “She was always telling me my friends ain’t my friends,” he says. “Stay out of trouble, ‘cuz your friends ain’t your friends.” She knew the lure of bad behavior and easy money, and she tried to protect him.

The warnings fell on deaf ears, though. At least when Sinclair was younger. He saw his family didn’t have much, and he saw how hard his mom had to work to provide the bare minimum. He thought, “I ain’t gonna be like that. I’m gonna make it on my own.”

It didn’t help that he struggled in school. Reading and writing didn’t come easily to Sinclair. He spent time in a resource classroom, where other kids had similar learning issues, but that didn’t stop him from feeling shame. He told no one else of his troubles, holding it on the inside, keeping it secret.

He began to notice some of his friends had all the things he wanted. One friend in particular, he saw, had all the jewelry. All the clothes. All the trainers. “He used to ask me, when are you getting these new trainers, and I had to say I don’t have the money for that.” Instead, Sinclair had to ask his father or his sister to give him $50. That wasn’t how he wanted to live his life.

A week later, at 17 years old, Sinclair started selling drugs. It was so easy. He took $30 cash he’d received from his aunt for taking out her trash and cleaning her yard and bought $100 worth of drugs to sell. He moved those, kept $50 in his pocket, and used the other $50 to buy more drugs. He dropped out of school that year and would continue selling drugs until he was 31 years old. “I lived the criminal life,” he says, “Because I knew I didn’t have what it takes to get the job, and I’ve gotta do something to get money.”

Of course you can’t live a criminal life without trouble finding. you

Sinclair’s first arrest came when an acquaintance pushed him to sell drugs to an undercover cop. Sinclair had a bad feeling about the sale but went ahead anyway. For that, he got a slap on the wrists and probation, but that was just the first time. Eventually, he got caught up in a gun violation, since he always had a gun on him. “For protection,” he says. “Always for protection.” The charge could have carried up to ten years in federal prison. On his day in court, he saw his mother and sister crying and knew how much he had hurt them. When he was allowed to address the judge, he said, “Sir, I know I did wrong. If you take light on me, you won’t ever have to worry about seeing me in your courtroom again. I’ll do the best I can to stay out of trouble.”

The five-year sentence was a relief – people around him had 30, even 40 years – but prison itself wasn’t. Federal prison is no joke. There are so many rules you can’t even walk on the grass. If you get locked down – often, if anyone messes up, they lock a whole unit down – you spend five days inside your room. Your meals are always the same: bologna sandwich and water, served through the locked door.

In prison, Sinclair saw three people get stabbed. One of them wound up in ICU after five people attacked him. Sinclair knew something had to change. He had to stay out of there.

He spent his prison days spending time with people who had positive attitudes. He’d do his assigned chores, visit the library, take naps. Anything to keep out of trouble, staying away from the “nonsense” of prison.  He learned there were others like him, others who struggled with reading and writing. Sometimes they would ask Sinclair for help with their canteen sheets. He learned not to be ashamed of his struggles. He was not alone.

Finally, his time served, Sinclair was released, first to a halfway house for six months, then home. His father knew someone who’d been through Turning Leaf and told Sinclair about the program. He came here, in his words, telling everyone who would listen, “to get a strong head on my shoulders so I can get a nice job.”

It’s been life changing. At Turning Leaf Sinclair learned he could always ask for help. He learned skills like “stop and think” to keep himself focused and on the right track. His goals now are simple: get a job, get his own place, and stay out of trouble.

“The streets aren’t what you’re hunting for,” he says. “And to anyone out there with a little trouble with their reading and their education, don’t let that stop you from doing what you have to do to live a normal lifestyle. Turning Leaf is right here for you.”

That’s right, Sinclair. We are here for you, now and always, and we are so proud of all that you’ve accomplished already. We can’t wait to see how bright your future is!