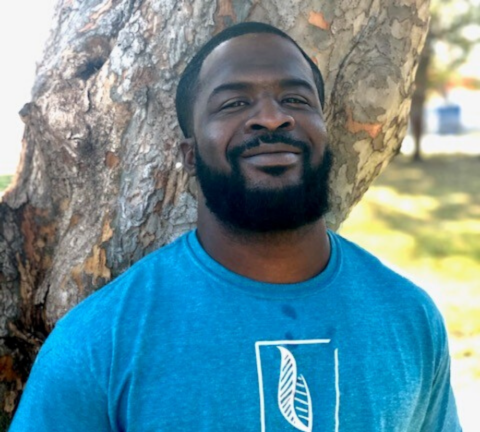 Some kids are lucky enough to grow up loved. Even if their family’s circumstances aren’t great, they still know the feeling of love and acceptance. Of being wanted.

The injuries inflicted upon a child whose life is absent of love can take a lifetime to heal. Randy spent his life looking for the kind of support and affection he never got at home, and unfortunately, he looked in a lot of the wrong places before he made his way to Turning Leaf.

This is Randy’s story.

Randy’s mom and dad split up before his first memories. He grew up with three siblings and mother in Savannah. Randy’s mom always worked and paid the bills, but in many important ways she chose not to be a parent. She was loud, full of life, always up for a good time, but her good time didn’t involve her children. “She was going to live her life” Randy said. “She went out a lot and when she was home, she didn’t pay attention to me unless I was getting into trouble. She would dress like a movie star and me and my brothers would be in dirty clothes. I never, ever, ever got what I wanted for Christmas. Ever.” His mom made it clear that she wasn’t interested in him. Randy’s older sister of five years raised him and his two brothers.

At nine Randy reunited with his dad. He escaped to his dad’s house whenever he could. It was a place with more structure but not the emotional investment that Randy needed. His dad’s attitude was “get what you need yourself and stay out of my way.” There was a lack of accountability in both households. When Randy got into trouble at school his dad came to pick him up but didn’t talk to the teachers or Randy about the incident. He didn’t yell or get upset. His mom took a different approach. She beat him when he was in trouble but otherwise ignored him. When he was ten years old, Randy stayed out all night long and no one came looking for him.

Randy spent the next 20 years of his life looking for the love he didn’t get when he was young.

The best thing in Randy’s life was school. He lived with his mom in a Section 8 housing complex which meant he was bused to a nearby magnet school with a mix of white kids from better neighborhoods, and mainly black kids from the housing projects. He liked school and his teachers. When he was in fourth grade, he wanted to be a marine biologist. Everything changed when he moved neighborhoods and was forced to attend the neighborhood public school. In fifth grade Randy was being taught what he had already learned in third grade. He became disengaged and frustrated. He complained to his mom that he couldn’t stay in the new school, but she didn’t listen. In sixth grade things got bad. Randy thought, “If they don’t care about my education, why should I?” He began skipping school, and when he did go, it was only to sell candy and hang out with girls. Randy was sent to an alternative school and dropped out in eighth grade. By the time he was 13 he was staying away from home for a week at a time and no one cared.

Women became his focus. The interpersonal connection he could make with women fascinated him. By the time he was 20 he had three children. He was working what he calls dead-end jobs. “I’d get my paycheck and it’d be gone within 24 hours. I always worked. Sometimes I even worked two jobs, but I couldn’t figure out how to survive on the little money I got, so I always did other illegal things too – sell drugs and steal cars.” Randy was arrested for the first time at 20 for stealing a car. He served a short sentence in jail, but he didn’t change his behavior. Randy went to prison four times over the next eleven years. One time he was only out for 35 days before he was re-arrested.

He knew what he was doing was stupid. And for the most part, he knew he was going to get caught. So why didn’t he stop? “I was a follower. I wanted my friends to know I had their back. I

During Randy’s last prison term something changed. He was transferred to a prison yard where he had access to meaningful programs. He learned about business, real estate, textiles, horticulture and custodial maintenance. He began talking with men who had run successful businesses and had made real money before going to prison. These men were asking for his thoughts on ideas. They cared about his opinion. Randy’s image of himself slowly started to change. He began to think, “If they did it, why can’t I?”

Randy was released from prison in November. He’s not going back to Savannah, to his old people and places. His plan is to start a new life in Charleston with the help of Turning Leaf. His major goals right now? Complete Turning Leaf. Enroll in school. Find a job that will pay him a living wage. And learn how to accept and love himself for who he is today.

You’ve got this, Randy! We’re behind you, all the way!