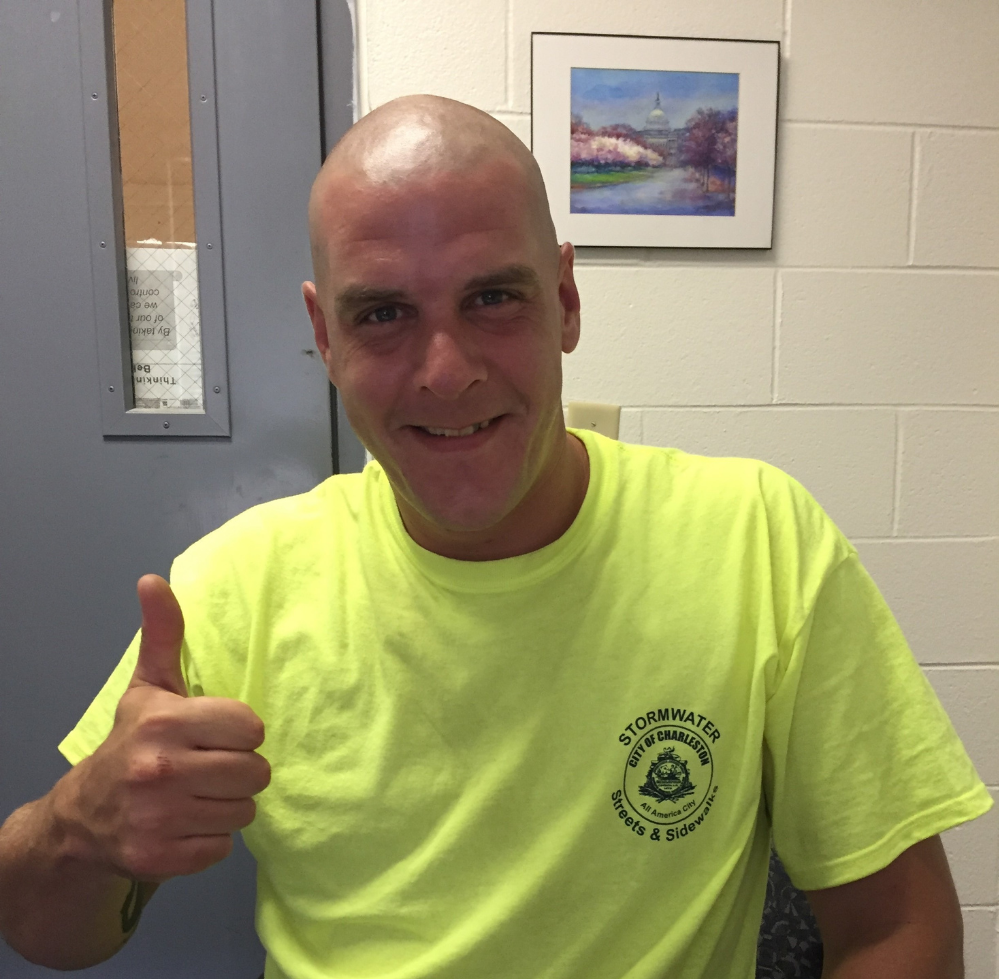 But to understand exactly how remarkable a story is, sometimes you need to understand the depths of despair through which that person has traveled. This is Chip’s story.

Chip’s childhood was fairly quiet. He grew up in Massachusetts and vacationed with his family down south. Trips to Florida and Myrtle Beach were the norm, until his father had an accident in 2000 and the family moved south to enjoy the warmer climate. The move wasn’t welcomed by Chip; then a freshman in high school, he voiced his anger by acting out: skipping school and smoking pot became his norm. A drug charge at 17 ended with a fine and a slap on the wrists, and life began to escalate.

By the time Chip was 27, he was married and had children. A job. A normal, everyday life that most people would be proud of. Unfortunately, though, Chip was leading a double-life. “I was taking pain pills all the time,” he says. “I was making drug deals, ripping off people at work, all to support the habit.” He asked his wife for help but she kicked him out instead, and soon Chip had taken up with a new girl, and together they dove deeper into their habit: IV heroin use.

“By then,” he says, “I was physically dependent. I was working just to stay high.” Working to stay high translated into more trouble. He was arrested in 2014 on a heroin charge and numerous breach of trust charges from various employers. “People in jail thought I was snitching on someone because I kept getting pulled out to go to the courtroom to get served more warrants,” he says. “But that’s just how life goes sometimes.”

While in jail, he spent time evaluating things. “I became jailhouse-religious,” he says. “I prayed every night that I could get my family back together.”

He tried. He really did. After his released, he and his wife were in the process of reconciling. He was trying to stay clean. And then tragedy struck: his wife passed away around Christmas in 2015.

“I loved her with all my heart,” he says. “The night she passed, everything got taken away. It was like I was shit on by the universe, so I was just like…fuck it.”

His behavior and addiction spiraled out of control as he fell into a pit of self-destruction. His girls were with their mother’s parents, and he fell apart, a prisoner to heroin. “I needed it,” he says. “At any cost, right then, right now. I’d wake up sick and obsess over what I needed to do to get well for the day. Anything.” He spent his days on the streets, scavenging metal to salvage, stealing from mechanics’ garages and selling the parts. He never saved any of the drugs for the next morning; he couldn’t plan that far ahead. “I wanted to die,” he says. “My wife was dead and I wanted to be with her.”

At his lowest point, he remembers having nowhere to go. He’d burned all his bridges and spent nights in a homeless shelter. He was so poor that one day he didn’t even have a bottle of water with which to mix his dope. “I used rainwater from a puddle,” he says. “I didn’t get sick but afterwards I was completely disgusted with myself.” A couple weeks later he caught another charge and when he was released on probation he went straight to rehab. Life began to change.

His parole officer recommended Turning Leaf to him. There, he found a program that would help him rethink everything. “Y’all would call me out every time I wasn’t doing right,” he says, laughing. “Black and white thinking, strong personality, understanding other people’s feelings, weighing options and consequences. I struggled with those things.”

When he began the program he didn’t think he’d be able to stay sober, and the path hasn’t always been straightforward. He relapsed while still in Turning Leaf but came clean to the team before letting a drug test give him away. He saw how the people of Turning Leaf were willing to help him. “When I left the program, the support from you all didn’t end there. It never did.”

As Chip worked to turn his life around with help from Turning Leaf, AA and NA, his first issue was to regain custody of his daughters. The case was long and difficult. His in-laws had the girls and there were things he needed to do to get them back: get his driver’s license, a job, his own place. Even once he met those criteria, it wasn’t easy, but Chip was willing to fight. He says, “Who doesn’t, for their kids? If you’re a father and you don’t do everything you can for your kids, to be in their lives…that’s not how my dad raised me.” Turning Leaf was there with him every step of the way; he’d go by the program just to talk things through.

His first night having full custody of his girls was joyous and surreal. He’s re-learning how to parent. His 12-year-old pushes boundaries and struggles to control her diabetes, but together they’re learning the discipline needed to manage the disease. “I try to understand her feelings, but I also try to help her understand how to process them better,” he says. He doesn’t want them all to just get by; he wants them to thrive.

To that end, Chip has worked hard to succeed at a career he loves. Coming out of Turning Leaf he worked full time for the City of Charleston. He took side jobs delivering pizzas and landscaping. He met a lot of people, faced questionable situations, and tried to make ends meet. Soon it became apparent through a cost-benefit analysis he could support himself best by running his own landscaping business. He started small, buying a car, a push mower, and some other tools.

Today, Chip’s business is thriving. “I’m in a great place,” he says. “My goal is that when guys graduate from Turning Leaf, I want to be a job partner for you.” He wants to pay it forward, helping others in the same way he’s been helped. He hopes to get married soon to his live-in girlfriend so his daughters have a full family. “My girls are the reason for it all.”

Chip, you’re a brilliant example of how Turning Leaf helps change lives. Thank you for sharing your story, and enjoy your new life with your beautiful girls.